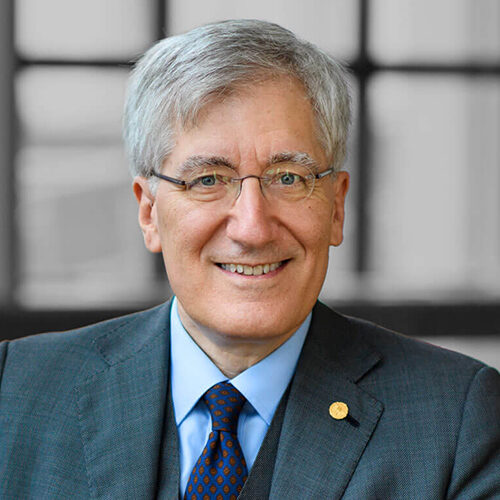 Robert Peter George is an American legal scholar, political philosopher, and public intellectual who serves as the sixth McCormick Professor of Jurisprudence and Director of the James Madison Program in American Ideals and Institutions at Princeton University. He lectures on constitutional interpretation, civil liberties, philosophy of law, and political philosophy. George, a Catholic, is considered one of the country’s leading conservative intellectuals.

In addition to his professorship at Princeton, he is the Herbert W. Vaughan senior fellow at the Witherspoon Institute, a research fellow at the Notre Dame Center for Ethics and Culture, and at some other institution. He has frequently been a Visiting Professor at Harvard Law School.

On December 8, 2008, George was awarded the Presidential Citizens Medal by President George W. Bush in a ceremony in the Oval Office of the White House. His other awards include the Honorific Medal for the Defense of Human Rights of the Republic of Poland, the Canterbury Medal of the Becket Fund for Religious Liberty, and others. He holds nineteen honorary degrees.

In 2009, George was called the “most influential conservative Christian thinker” in the United States by David Kirkpatrick of the New York Times. George was described by The New Yorker in 2014 as “a widely respected conservative legal philosopher” who has “played [intellectual] godfather to right-leaning students on [the Princeton] campus.”

Robert George is the author or editor of 70 books and several articles, including Conscience and Its Enemies: Confronting the Dogmas of Liberal Secularism (2013), In Defense of Natural Law (1999), Great Cases in Constitutional Law (2000), Constitutional Policy: Essays on Constitution Making, Maintenance, and Change (2001), Mind, Heart, and Soul: Intellectuals and the Path to Rome (with RJ Snell) (2018), Embryo: A Defense of Human Life (2008), The Meaning of Marriage: Family, State, Market , And Morals (2006) and others.